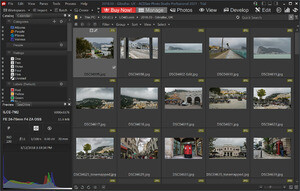 A review of ACDSee 4 by Fernando Ortega

ACDSee Pro for Windows is photo organization and photo editing tool designed especially for photographers. While the program is more known as a professonal application for Apple Macintosh computers, the Windows version also does a stunning job at keeping photographs organized. It also integrates itself with online photo sharing services and integrates well into your Windows software portfolio.

ACDSee Pro not only keeps things up-to-date and organized, but also features many great photo filters and optimizers. It can turn the dullest looking photo into something which could take your breath away when you compare it to something that hasn't had anything done to it. The suite offers owners with complete artistic control and can correct a number of flaws in the pictures you're taken.

From lighting and exposure, uneven lighting, bad contrast levels, or generally uneven photos.. ACDSee does a great job of patching those imperfections up.

The list of filters and fixes included with this application is absolutely huge and it can work on the photos you import at such a faster rate than it would when compared to programs like Adobe Photoshop, because ACD lists the files with thumbnails in a list on the screen. Fixing and applying filters to photographs is pretty much as easy as a couple of clicks.

On our tests, importing 25,000 digital photographs only took an hour-and-a-half and it was able to sort the files based on EXIF data stored within the file.

ACDSee has built a name for itself among its community and its reputation at organizing and perfecting images is well-deserved.

ACDSee 4 can apply special effects to a picture, view EXIF data and convert RAW to JPG.

This download is licensed as shareware for the Windows operating system from graphics editors and can be used as a free trial until the trial period ends (after 30 days). The ACDSee Pro 4.0.237 demo is available to all software users as a free download with potential restrictions and is not necessarily the full version of this software.

Compatibility with this image viewer software may vary, but will generally run fine under Microsoft Windows 10, Windows 8, Windows 8.1, Windows 7, Windows Vista and Windows XP on either a 32-bit or 64-bit setup. A separate x64 version may be available from ACD Systems International Inc.